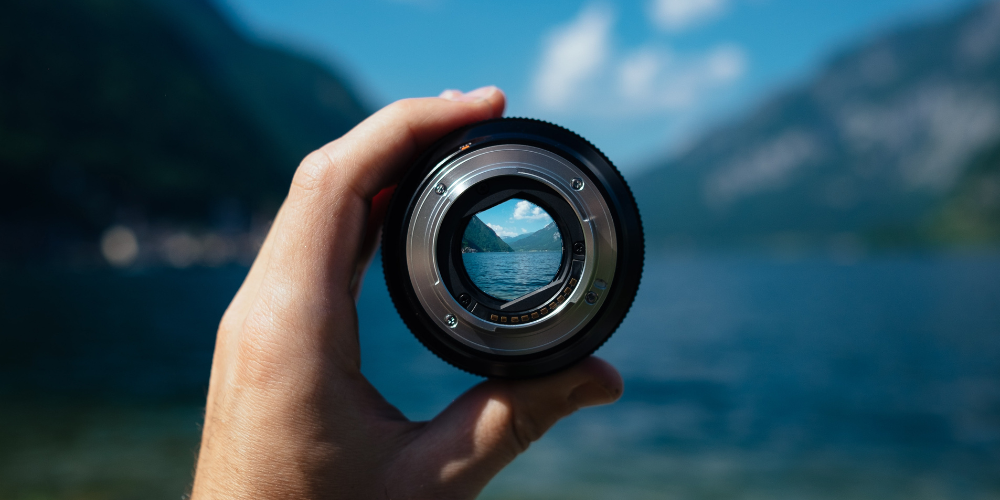 Responsive search ads have redefined the way advertisers test and write ads. Here's how to find success and optimization opportunities.

Responsive Search Ads (RSAs) have required advertisers to shift their thinking of how ads are written and tested. Advertisers need to create copy that will convert while also understanding that ad automation and machine learning are paramount. Writing relevant ads requires as much emphasis on the number of headlines and descriptions, also known as assets, as the content.

Though more impressions is important, meeting conversion goals will determine success. You need to find the right balance of adhering to Google’s preferences while optimizing toward conversion metrics. Ad copy strategies may differ between campaigns and ad groups.

Even with the option to add up to 19 assets, the fundamental principles of paid search still apply. Ads should include:

Ad strength is Google’s measurement of how relevant your ad is to users. It estimates the relevance, quantity, and diversity of your ad content. Ad strength ranges include:

The greater the quantity and variety of assets that you provide, the better your ad strength will be. It’s not defined how your metrics will be impacted depending on the ad strength. In general, the better the ad strength, the more your ads will show. The example below showcases an ad with an “Excellent” ad strength.

Let’s review each component to see why the ad has the highest strength.

This ad is using all 15 headlines. RSAs work best when all headlines and descriptions are populated. The more data that is available, the more the system can learn and showcase the winning combinations.

Do not pin assets unless your client requires that certain messaging needs to be seen in a strict order. Pinning assets lowers your ad strength. When you remove a pin, your ad strength may increase.

The argument for pinning assets is that it can improve your ad’s conversion rate, even if CTR suffers. Some advertisers have found that pinning the call-to-action in the first or second headline improves conversion rate. However, pinning a headline will result in lower ad strength and therefore lower impression share. Think about what is important to your client when testing.

If you decide to test pinned assets, there are four options you can take. The first option will net the most traffic. You can update your ad with the pinned asset and let it run. The second option is to create a new ad in the ad group that has the pinnet asset. The problem is that the two ads won’t run evenly and the non-pinned ad will most likely see the majority of the impression share.

The third option is to run a 50/50 split test among two different ads by setting up an experiment. You would set up a duplicate campaign and pin the asset. The downside to an experiment is creating two campaigns to test one ad message. Reporting could be convoluted.

The fourth option is to use ad variations. Similar to an experiment, you can do a 50/50 split test with a single ad without having to create an experiment. You tell the system the messaging that you want to adjust. For example, you can test a headline of “Limited Supplies – Buy Now” vs. “Shop Our Selection.” The caveat is that unless you pin the asset, the messaging can show in any headline and you wouldn’t have a true indication of performance. For further RSA ad testing tips, Adalysis has a great primer.

Include popular keywords in your headlines

Include the keywords from the ad group in your ad text. With so many assets, you can use multiple instances of your theme. An ad group for “business chat” may have keywords such as:

These keywords can all be headlines and a part of descriptions. Google even offers suggestions for keywords to use in your headlines based on your existing ad group keywords. If the keyword is highlighted in green and has a green checkmark, it means that variation is being used in a headline.

Whether a keyword is highlighted or not, you can see what the search volume over the last 30 days has been by hovering over the keyword with your mouse.

Try to include keywords in 7 to 10 of your headlines and at least two of your descriptions. As long as you are using different variations and including additional text where applicable (ie: Try Our Business Chat Software), the messaging will sound natural, leading to the next component.

The rest of your headlines should include a mix of value-ads, brand recognition and call to actions. In other words, why should users click this ad? As with keywords, there are lists of common value propositions to add as headlines. 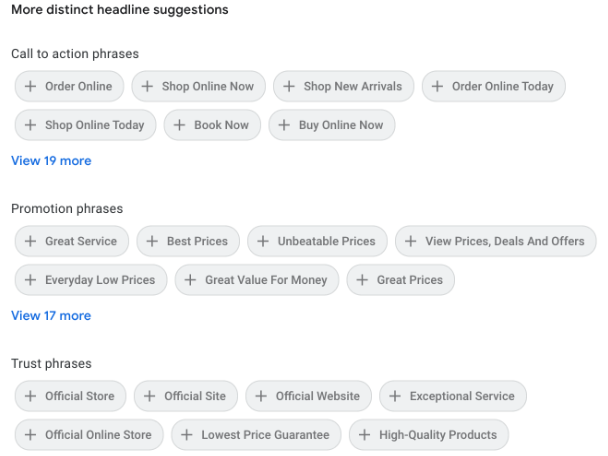 A mix of headlines containing keywords and various value-ads will improve your ad strength.

As with headlines, making your descriptions unique with your targeted keywords and value-adds is crucial. Though descriptions aren’t as pronounced as headlines, they still contain important information that can sway users to click.

There is limited reporting available for headline and description performance. By clicking the “View assets details” link below an ad, you can see the performance of these assets.

Impressions are the only viewable metric. For example, you can see that over the last 30 days, headline one has 2,500 impressions while headline two has 2,300. Each asset is also assigned a performance rating. These ratings include: 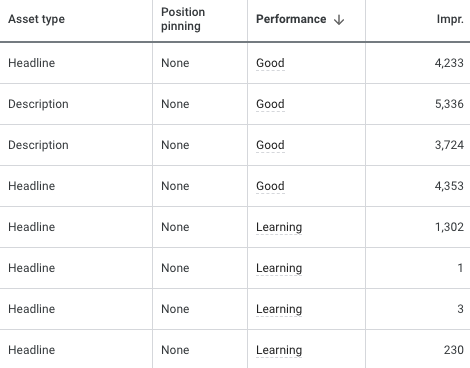 RSAs need 2,000 impressions over a 30-day period for assets to display a performance rating.

You can also see an aggregate view of all of your headline and description assets at the campaign level. In the left-hand navigation, click “Ads & assets” and then “Assets.” Ensure the table view is set to “Assets” and the campaign type to “Search.” This view will display how many ads are using each asset and the overall performance rating.

The most efficient way to find your low performance assets is to sort from high to low at the campaign level. Click the percentage link to see which ads have the low performing assets.

Review your low performing assets on a weekly basis and replace them as necessary. This cadence may differ depending on the overall volume of traffic in your account. Look for “good” and “best” performance assets for new headline and description ideas. Our RSA script can help with this task.

Writing RSAs is a task in finding the balance between what will convert and what Google’s automation and machine learning are trying to achieve. A challenge is the limited visibility we see in performance metrics. We need to rely on Google-defined designations rather than actual metrics.

GET THE CLOSED LOOP NEWSLETTER​

Closed Loop has been named one of the Ad Age Best Places to Work 2023, an annual ranking of companies that lead the pack in factors ranging from pay and benefits to culture and leadership. Learn more about this distinction and why our agency is a destination employer for the 6th consecutive year.

Expanding into international markets doesn’t have to be as complex and challenging as many brands think. In this episode, we explore how the right strategy, tools and partners can drive international campaign success, despite conventional thinking. 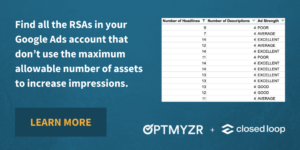 Advertisers may see RSA performance improvement by simply filling in the maximum number of assets. Here’s the script we created with our friends at Optmyzr to do just that.